It’s hard to adequately explain what Ed Todd has meant to ABLE. As one of the founders, he set the direction for the organization and gathered many dedicated and outstanding volunteers to do this wonderful work domestically and in locations around the world.

In addition, though, in the early years he was the central focus for everything. He established the office (in space he essentially donated), handled all of the logistics for mission trips, dealt with all of administrative tasks,…. He devoted countless hours to getting ABLE established and efficient.

He continued that work and served as President until ALS made it physically impossible for him to carry on. Even when he couldn’t do that work, he continued to make valuable contributions as a Board Member Emeritus – helping guide the Board and providing valuable ideas and assistance via emails and conversations. His commitment to ABLE never wavered, regardless of his physical condition.

The Todd family has encouraged anyone who would like to make a memorial donation to honor Ed’s life and legacy to do so through the ABLE Endowment Fund, established by Ed and Marilyn Todd. All donations received through May 2016 will be allocated to this fund. After that date, donations should be specified for the Endowment Fund.

For details, go to the “donation” page on this website. 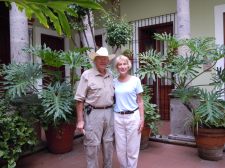